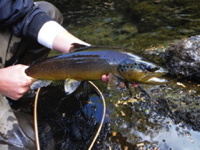 Coyhaique and Getting There

Coyhaique is a town of around 50,000 inhabitants, the capital of Chile’s Aysén region in Northern Patagonia, nestled in the foothills of the Andes, and by far the largest population centre in one of Chile’s more sparsely populated regions. Balmaceda, the nearest airport, is roughly 45 minutes’ drive away and there are two daily domestic flights from Chile’s capital Santiago, approximately 1350 km as the crow flies and two and a half hours’ journey time in a LAN Chile Airbus jet.

What distinguishes Coyhaique from an angler’s perspective are the 500 bodies of fishable water within roughly two hours drive of the town square, comprising several main rivers and hundreds of creeks and lakes teeming with wild trout. The area has been a fly fishing destination for two decades, with several established full service fishing lodges and around twenty other independent guides for those preferring this option while staying at the various bed & breakfast inns and small hotels in the area. Nevertheless, there is very little fishing pressure given the breadth of options available, and each guide has their own favourite set of lakes, creeks and stretches of river. On three of the four days we fished, we saw no other fishermen while we were on the water, and on the one day that we did encounter other fishermen, it was only one other boat on a large lake. 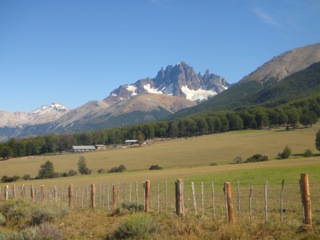 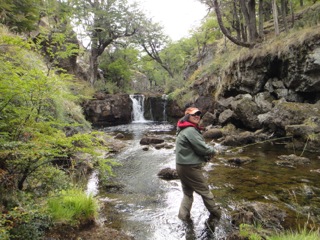 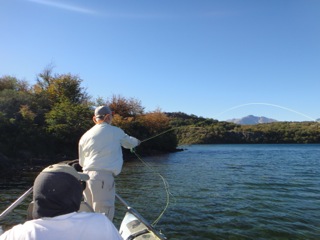 There is a huge variety of fishing on tap in Coyhaique. Fishing is primarily catch and release – while there are some rules on what sizes of fish can be taken and when, all the local fishing guides strongly encourage putting the fish back. Although there are some private lakes in the area, the vast majority of the fishing is on public waters governed by an affordable Chilean national fishing licence (US$18 for four days). In addition, our guides did have some pre-organised arrangements (included in our guiding package) with local ranchers and farmers to gain 4×4 and boat trailer access to more remote waters when it was necessary on some days to traverse privately-owned land. 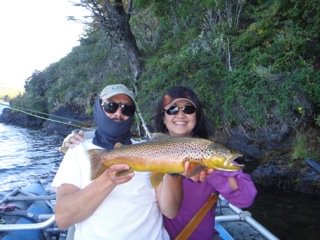 On Day One, we fished an isolated lake two hours’ drive from town in the picturesque Cerro Castillo region, with fantastic views of this majestic peak and its glacier. This lake held a population of beautifully-coloured browns with fat cigar-like bodies, most of those we saw appeared to be in the 3 to 4 lb range, with several at least twice this size. Here we fished from a boat using huge dry flies such as Fat Alberts, Chernobyl Ants and large sedge patterns, either sight casting into skinny water flats and sandy beaches (almost like bone fishing with the occasional tailing fish in three inches of water) or blind casting at structure (rock formations, fallen trees, weed beds) over deeper waters. Best fish of the day was landed by Marie, a beautiful brown of nearly 5 lb. 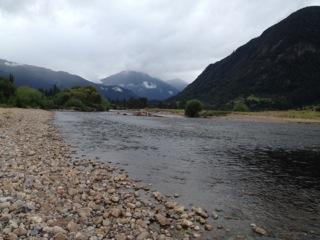 On Day Two, we fished the Lower Simpson river. Apparently, earlier in the spring, floating down the river in drift boats is a good tactic but in our case, it was the begining of autumn, it had not rained for some time and the water was too low, so we walked and waded a succession of pools. We started the day upstream nymphing with a two-fly team and strike indicator, switched to dry flies (small sedges and mayflies) when a hatch erupted in the afternoon, and finished the day very successfully fishing size 10 Tony Hern blue flash damsel nymphs … although the latter was designed as a British stillwater trout pattern, it seemed to work very well in these Patagonian waters, catching both the biggest fish and the most fish that day. The fish here were an equal mixture of browns and rainbows, mostly 1 – 2 lb with the odd fish in the 3 – 5 lb range, the latter including a very aggressive brown of around 4 lb which ripped off half my backing charging downstream before I managed to eventually land it. Late in the day, we also stalked a couple of huge fish (each of which must have been over 8 lb) from the banks but didn’t manage to hook either, despite some initial interest in following the fly. 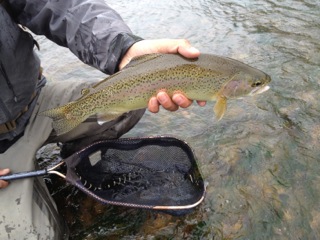 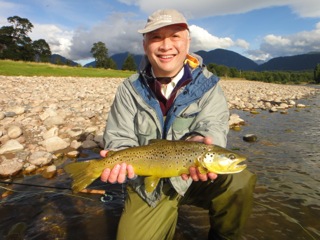 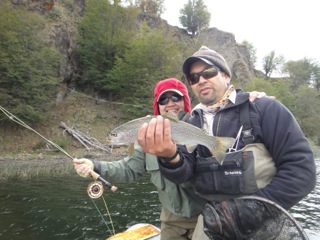 Lago Frio (so called because it regularly freezes over in winter) was our destination on Day Three, a well-known local lake surrounded by farmhouses and homes, half an hour’s drive from the main town, populated solely by rainbows. This was definitely a lake for quantity. Fishing from a boat, Marie landed over 30 fish, using exclusively the afore-mentioned blue fish damsel pattern which had been so successful the day before. I was experimenting with different flies at different depths and caught nearly 20 fish using a mixture of dry flies, soft hackle emergers, hares ears and small lures (which the North American-trained guides referred to as ‘streamers’). Most of the fish landed were in the 1 – 1.5 lb range, plus a few bigger fish up to 2.5 lb, although we saw some larger specimens in the water. And all were hard-fighting wild fish, much more feisty than their similar-sized stocked cousins in British stillwaters and rivers.

On Day Four, our guide asked whether we fancied “quantity or quality?” that day. We opted for the latter and decided to pursue trophy fish, driving over two and a half hours to wade the margins of our guide’s “secret” lake and its inlet creek, both of which our guide said “contain only big fish”. Well, this was certainly no empty promise. As you can see from the photo below, one of the pools in the inlet creek alone held at least eight huge resident browns (maybe you can count more from the photo?), each of which I estimated to be in the 5 to 8 lb range. 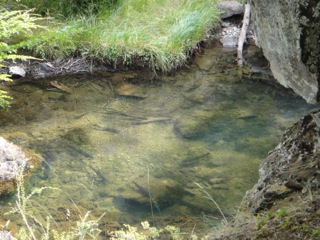 We started fishing with large dry flies without much success but when we switched to big streamers fished deep (cone head woolly buggers with legs custom-tied by our guide, and large orange variants of the Tony Hern blue flash damsels fished as streamers), we managed over half a dozen hook-ups and landed three lovely specimens, two browns of 5 lb each and a 6 lb rainbow, all of which put up huge fights before being landed. 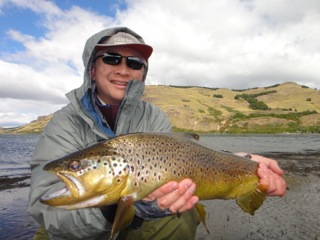 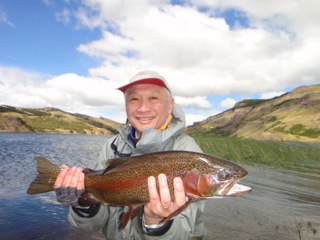 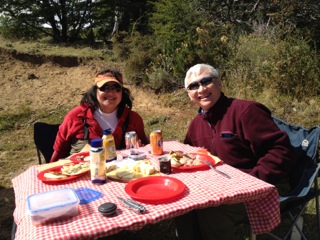 As mentioned earlier, there are several well-established full service lodges with good reputations such as the Coyhaique River Lodge and Cinco Rios. Marie and I often prefer to fish with independent guides as this gives us more flexibility in lodging options and ensures we know in advance who we’ll be fishing with. So in this case, we fished with Francisco (‘Pancho’) Vilches and his colleagues Diego and Nico from Chile Trout, a very experienced and knowledgeable independent guiding service, all of whom speak excellent English. Pancho also organised our lodging, breakfasts and dinners at Patagonia House, a very friendly and well-run local bed and breakfast inn. And each lunchtime, our guide for the day would lay out a lovely picnic lunch (see photo) including wine.

As far as tackle was concerned, we fished with 6-weight rods and floating lines, adding sinking polyleader tips or split shot for getting into the deeper spots. Earlier in the season, with high water from snow melt, 7-weight rods with sinking tips and big streamers would be useful we were told. And of course for some of the dry fly fishing, a 5-weight rod would have been more fun and ensured more subtle presentations. If luggage space is an issue, a 6-weight is the best all-round compromise. One should bear in mind that it’s always windy in Patagonia and many of the best fishing spots are quite exposed to the elements. So fast action rods make more sense in these conditions.

Besides trout, there is also a small run of king salmon in some of the rivers (Al and Larry from Canada, who were the other fly fishermen staying in our B&B inn at the time, landed several kings while we we there with 8-weight rods and sinking lines, including the 40 lb monster in the photo below), but king salmon are an unreliable and hard-to-catch bonus as this is primarily a trout destination.

The fishing season in Chile runs from November through to April (seasons are reversed in the Southern Hemisphere) and the summer holiday period (just before Christmas through to the end of February) sees more tourists in the area who have come to hike and to experience the fantastic Patagonian scenery.

Once again we would like to thank Pancho and his team at Chile Trout, as well as the team at Patagonia House, for their expertise and hospitality.