The Ultimate Crab Cake Challenge … my travels began in Boston, driving up to as far as Brunswick and the surrounding islands of Maine. Then back down, through Rhode Island to New London, Connecticut, aboard the Cross Sound Ferry to North Point, Long Island, New York.

Bypassing hectic, crowded NYC which was in fact a great idea. The breathtaking view and crossing of the beautiful Verrazano Bridge onto Staten Island and off via the Goethals Bridge heading straight onto the 14 lane highway in Elisabeth, New Jersey, driving through to Princeton. Then into Philadelphia and its surroundings and finally down to Baltimore, flying home from Washington DC. 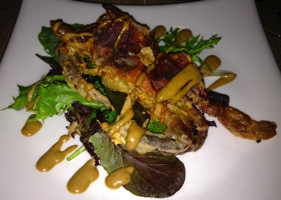 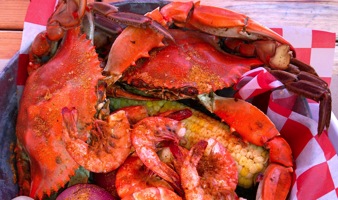 A fabulous journey of food and drink. Running parallel to the Atlantic coast from North to South. Following the food trail of the almighty Stripe Bass on it’s migration route.  Cornucopia of seafood heading south from lobster to clams to oysters to crabs and lastly the sweet shrimp before it heads north again in the new season.

The topic here is the all time American favourite CRABCAKE – a patty, scoop or dollop of crab, with or without added fillers like bread, flour, vegetables, sometimes further breaded, seasoned and either, deep fried, pan fried or grilled. Served with or without sauce. And of course the all important secret herbs and spices delicately mixed into the mixture.

Callinectes Sapidus – “blue swimmers” are found in the Atlantic waters from Nova Scotia to Argentina. To me, the only crab worthy of being turned into a “CrabCake”. These crabs are fairly fiddly to take apart but well worth the effort. Nothing in the legs worth cracking for. Females vs Males? The abdomen of the female has a flap shaped like the Capitol in DC while the male has a long slender version looking more like the Washington Monument.

What makes the perfect crab cake, I guess is totally personal.

My sampling of crab cakes along the East Coast was certainly fun and fair. I have not included crab cakes northwards of Orient Point as the recipes are different and I truly believe New England north of Long Island produces better oysters, clams and lobsters.

First stop was twenty miles from landing at Orient Point. Noah’s,  a modern little place, totally packed on a friday night, in Green Point. The restaurant is indeed very interesting. Start with dips and tastes before trying the small American tapas style platters of sliders, oysters and of course the crabcake. Normal large plates of lobster roll, burgers using the freshest Long Island produce are also on the menu. Chef Noah Schwartz and his wife Sunita own this joint having bought it in 2010, after their stint in Sonoma California where they met. They returned to the East coast to be nearer family. The menu reflects his experience using the freshest ingredients and incorporating Californian fusion flavours.

Boasting 100% Jumbo Lump (i.e. no fake nor other species of crabmeat mixed in) this patty is in fact covered with a light crispy crumb coating and pan fried. Served with a mange tout and mango slaw, smothered in Mayonnaise. Chef Noah did capture the freshness of the crab and his hint of California-ness. 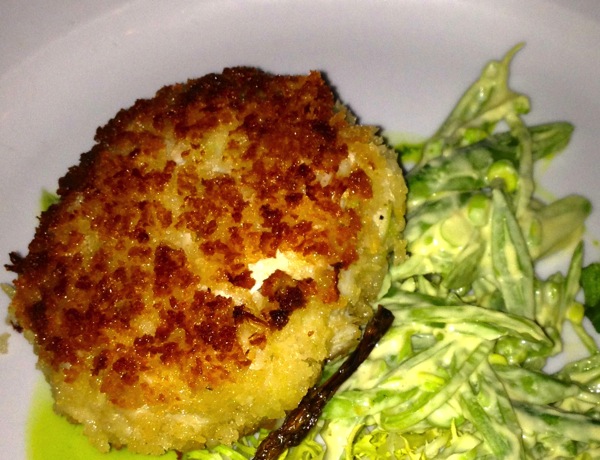 Legends was our next stop after a morning of wine tasting along North Fork. A gem of a find having driven around totally lost for a good 30 minutes due to a faulty Sat Nav system in the car. As the crabcake here was pan seared Asian style with lemon grass, ginger, garlic and served with sake teriyaki, it did not warrant a photo and was not included in the challenge. The restaurant itself was worth a mention and definitely worth eating at after some wine tastings.

Dinner was at another brilliant little restaurant, packed to the brim in Port Jefferson. Parking was certainly stressful. Fifth Season is passionate about local sourcing of it’s ingredients. Fresh, perfectly cooked and honestly priced. Again no crabcake but the pan fried soft shell blue swimmer is worth a mention. Still a crab and simply delicious.

Brunch at Rothmanns. Originally famed for it’s steaks, this 107 year old establishment has entertained the well heeled and famous including President Theodore Roosevelt. Opened originally by Charles and Franziska Rothmann as a restaurant and Inn on 10th August 1907 (we were very lucky to eat there on its birthday weekend on 11th August). Known originally as ‘The House of Eats’, Franziska an accomplished cook did all the cooking. Family owned till 1970 when the famous composer Burt Bacharach and his actress wife, Angie Dickinson bought it, changing it’s name to Burt Bacharach’s. Ten years later it, on the demise of their marriage, was sold to the Sbarro (of pizza fame) and the Missano family who then renamed it to the original Rothmann’s keeping the ethos of the original family virtues – hospitality, service and good food tradition that the Rothmann’s started all those years ago.

There wasn’t a crabcake in sight but the brunch menu consisted of over 50 different dishes of fish, meat, salads, breads and a colourful spread of desserts for a fixed price. The impressive mega silver bowl of boiled lobsters, whole roasted Stripe Bass to oysters shucked to order was just mesmerising. Then the sushi and sashimi bar right next to the seafood and raw bar. An Omelette station, cooked to order of course with bowls of fillings to choose from, Roast Beef au Jus, the classic breakfast station, pastries, breads, cheeses and even buttermilk pancakes made fresh to order. Maybe worth suggesting the inclusion a crabcake. Service was indeed excellent though we were encouraged to settle the bill promptly as there was a next seating to set up after 2 hours.

Broadwalk style crabcakes in a local deli in East Norwich. This was the only crab cake that I saw. A very sad inclusion but a must to show that all crabcakes are not created equal. Dry, bread crumbed and cracked, cold and served with a green sauce of some gloopy consistency. This deli was certainly filled with morsels of exciting food – competition to Rothmanns across the road. The food was certainly NOT cheap. 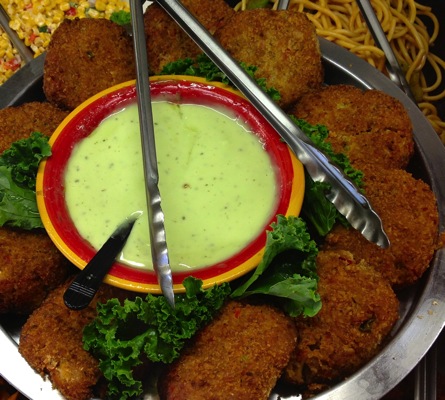 New Jersey probably has some great crabcakes but Princeton’s choice for dinner did not include this tasty morsel. A little University town with loads of tourists heeded better to the 10 ice-cream parlours that I managed to count in the space of an hour.

From here we drove to Philadelphia and it’s surrounding villages. Philly itself is a crabcake haven with most good restaurants showing off their version. 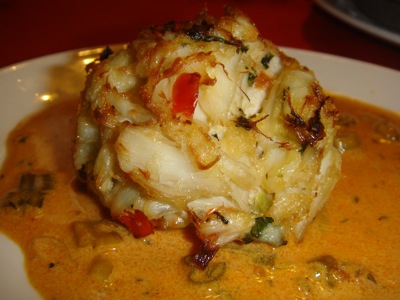 Del Frisco’s  is one of Philly’s institutional eats. Part of Double Eagle Steak Houses group, started 20 years ago in Texas. Old style wood panelled dining room with stately red velvet swags of material hanging from the rafters, iconic pillars mingling with the diners and hefty waiters, all experienced and fast talking. Opulent, grand and showy with prices to match.

With a long exorbitantly priced wine list (due to the old Penn state law of alcohol), the crabcake arrived before we even chose a bottle! The crabcake was pretty much 100% Jumbo lump with the odd bits of pepper and spring onion. A good balance of spice and certainly fresh with good flavour. One ice-cream scoop of the crab mixture, pan fried and finished in the grill to perfection. Succulent. Served on a cajun lobster sauce. Should I have asked for the sauce on the side??? Humm..

Competition is stiff in downtown Philly with all the big names Eats along Chestnut Street. From Five Guys with its signature barrel of while-you-wait roasted groundnuts (peanuts in their shell) to fancy fusion michellin starred eateries, the crabcake certainly had to be good. 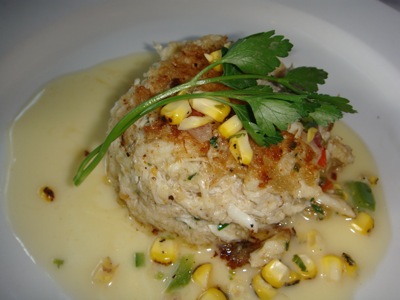 Next up was the Italian Maggiano’s not far from Del Frisco’s.   Known for it’s huge portions, this traditional Italian in the heart of town by the humongous conference centre and Reading Terminal Market.

A soggy-ier version with lump crab slightly more broken up.

This eatery was packed with kids and families. The Lobster Linguine would have given Desperate Dan a good run for filling his tummy. Guessing this restaurant is also famed for it’s doggy bags.

Morton’s Grill. A fresh chunky patty of crab on the outside. The sneaky crabcake. When cut through reality hit.. lump crab meat used as a “shell” with a gloopy mixture of sauce, herbs and filling inside. The plate was beautifully arranged and low lighting, music etc created an ambiance to divert taste! I rest my case. 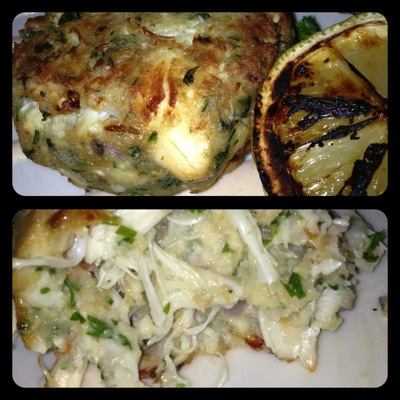 Supposedly the crab capital of the USA where crabs are pretty much the staple. Cracked and eaten on taped down brown paper with plastic bibs to stop the juicy dribble on one’s clothes. Steamed crabs, baked crabs, soft-shell pan fried crabs, crab chowder, crab sauce – you name it, they’ve crabbed it.

Gertrude’s at the BMA- Museum cafe by day and more substantial eats at nights with a discounted seniors night. Students also qualify for a small discount on certain dishes. Two versions of crab cakes and two sizes. Cleverly seasoned to give punters a choice. My personal preference was the original. 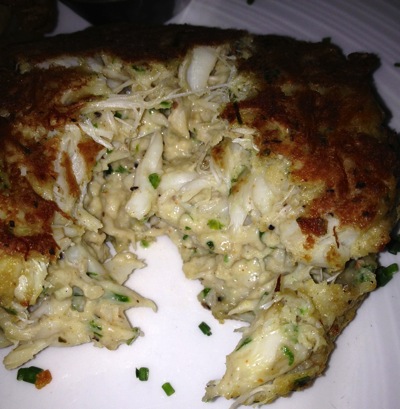 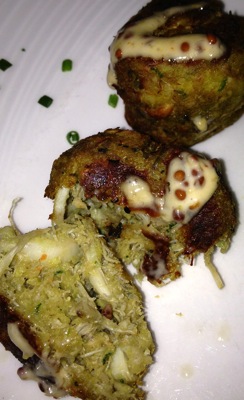 Phillips “the Crab Ambassadors” on the wharf by Pratt Street downtown Baltimore was my final stop.. Seated on the crab deck, we watched diners attack their food off the brown paper taped over the tables. We shared a Crab and Shrimp bucket consisting of 2 crabs, half a pound of shrimp, a “NattyBoh” sausage and some sweetcorn on cob. The Nerdy Geek had a crab cake sandwich. A sad choice of a skillet fried breaded patty. Dry, cereal filled and hardly any flakes of crab to be seen, served with a bag of crisps and some slaw. 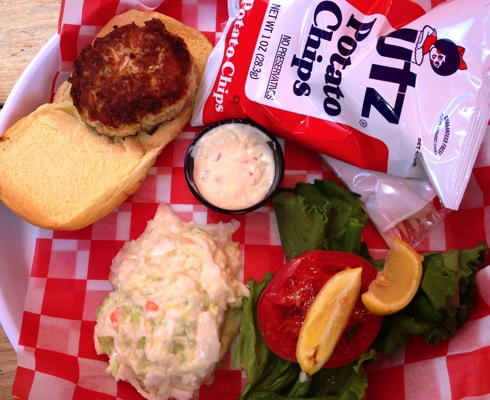 A crabcake has to be made with the Chesapeake Bay Blue Crab. Lump crab meat, large lumps of succulent moist meaty crab, fresh and sweet. Surprise me with a little seasoning of choice (and a pinch of Old Bay), ‘ice-cream scooped’ into a pan and lightly sautéed in a little butter. Keep them simple in the Restaurant style. No fillers. No bread. No crackers. Certainly no dipping in egg wash and crumbs then deep fried in oil. Broadwalk crab cakes are the bane of my life. A disc-like patty sandwiched between two bits of cotton wool hamburger bun, smothered in mayonnaise, tomatoes, lettuce and ketchup, all to mask the flabby, highly seasoned bread filled cake.