Kids birthdays are over. It’s been a good year for both of them. 15 and 22, exactly six years 51 weeks apart. Getting to the stage where even I’m not sure which is which.. taken at exactly the same age same jumpsuit…. must test the husband and the kids! 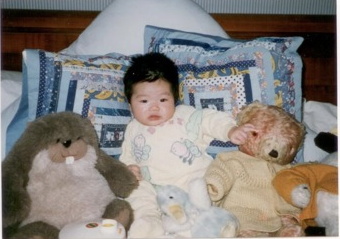 We are into October, the Indian summer is over and the winds are beginning to howl. Ma forgets to shut the velux and wakes up with a mega thought of oopsy… till the chilly breeze and raindrops hit her face… perils of an 81 year old sleeping in the attic guest room of an old Victorian house.

The good news this week includes TWO ripe, super sweet, purple gigantic figs almost bursting out of their thin, stretched skin, eaten straight off the tree. The last tomatoes harvested. For the first time, I am growing horseradish. The leaves are humongous and a serious snail magnet. Spent coffee grinds and crushed eggshell maybe the secret to the size of leaves as well as ridding the pesky molluscs. Here’s hoping for a even more humongous “thong” (yep, that is what it’s called, no kidding). Not sure why the choice but it sounded like a great idea having one’s own freshly grated and creamed over roast beef or mixed with soya sauce ready for the morsel of freshly sashimi-ed salmon, wild, of course, caught by none other than crazy fisherman husband. And if he doesn’t catch one, horseradish goes well with mackerel, too, mixing some grated beetroot into the mixture.

Fat green olives heavy, hanging off their strained branches, waiting patiently. I reckon a few more weeks till they are just on the turn for a more complex flavour. After all, these are BRITISH olives. Yes they will be soaked, and herbed in some fab new season Italian DOP EVOO from Antonio.

Sunday morning, the stove is busy boiling up a mega pot of “Kiam Chye Boey”, a peranakan (nyonya) stew of organic hock of bacon, slices of dried tamarind fruit, mustard greens, fresh chilis and other secret ingredients stored in Ma’s brain. Hokkien “Tow Yu Bak” (pieces of pork belly and meaty shiitakes slowly braised in a thick soya and garlic sauce) cooking slowly along side the stew. Some lucky friends this week, thanks to Ma.

While all this is going on, Ma decides to make her own version of muesli… and I thought I was the uber cook in the family. For someone like me who does not eat cardboard (cereal) nor “sawdust”and guinea pig food for breakfast, this is saying something. Here’s her basic recipe…. mix the following:

• Iranian whole dates, soft, moist, super sweet, toffee coloured. Destoned and quartered. Do not use the crinkly, dried, hard, chewy, sugary almost black stale gunk you get in shops. Definitely buy the best imported Iranian dates you can find. They are in season now.

and, I guess if you’re Scottish, a swig of single malt – drunk during the stirring and mixing of the above.