Sherry has always represented somewhat of an enigma for me. The typical sherry drinking stereotype (in my own humble experience) has been the eccentric old woman, smelling faintly of cats, generously swigging from a bottle of fino. As such, I though that on my recent visit to Spain I would attempt to demystify this somewhat skewed image.

For readers who wish to have quick background; Sherry is a fortified wine made in and around the Spanish city of Jerez de la Frontera. The actual word sherry is an Anglicisation of “Jerez”, and whilst for the rest of the world “sherry” has become common vernacular, the wine in Spain is still called “vino de Jerez”. The grapes used are almost exclusively Palomino (from the light fino to the darker oloroso), but Pedro Ximenez and Moscatel grapes are also used in sweeter dessert wines.

It was an interesting trip. Having been very kindly dropped off at the Gonzalez-Byass bodega in Jerez, we signed up for the tour of the premises. Gonzalez-Byass is one of the largest sherry producers in the world, with brands such as Tio Pepe and Croft, their wines have and continue to reach the far corners of the globe 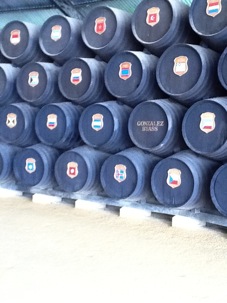 The first thing that one notices when going into the bodega is, in fact, just how big the producer is. The image to the left shows one of the many warehouses of the bodega, with this particular one having the flags of every country that the bodega exports to – with nations ranging from South Korea to Venezuela (as well as everything in between) it is not surprising to note that Gonzalez-Byass has had a very successful history.

The tour itself was executed very well. There were a number of nationalities present, with guides in a number of languages. Aside from the rather cringeworthy DVD shown at the beginning (with an orange skinned, morning dress clad representation of Tio Pepe himself narrating), it was an interesting insight into how sherry is made. What I personally found most informative was the process of how fino style sherry is made, and the use of flor yeast floating at the top of the barrel, giving fino style sherry its distinctive dry flavour.

What must be said though is that, whilst Gonzalez-Byass may be one of the larger producers of Sherry, it by no means is the best. The Sherry tasting offered at the end of the tour made this especially evident. Everyone was given a number of different sherries to sample (depending on how much was paid in the entrance fee) ranging from driest (fino) to sweetest (croft pale cream). Having sampled sherry made by the bodega Lustau in London a few days earlier, Gonzalez-Byass could not hold a candle. Most disappointing was the oloroso which lacked both depth and colour, and was perhaps the most unbalanced wine I have tasted in a while. Conversely though, the manchego cheese and iberico ham provided to complement the wine, was delicious….