The day was, as usual, an interesting one. Setting up and running an Italian event at London’s prestigious Queens Club seemed easy. The ballroom is a great venue and staff ever pleasing. With the “Eager Beaver” set up team, we seamlessly worked our way through the pallets of fabulous wine, top EV single estate olive oils, Aceto Balsamico, antipasti, pastas, and of course, luxury Italian leather goods. Then I was told His Excellency the Ambassador of Italy had requested his presence. Attention to detail increased.

Journalists, wine critics, fashionistas, foodies and VIPs arrived first. Photographers and paparazzi started appearing. With prosecco flowing the event eased into an easy start. By 6pm, the room was packed. Sadly, I had to excuse myself. Raced to London’s Heathrow terminal 5 to catch the BA0247 flight to Buenos Aires via SãoPaulo. Racing by London’s tube was by far the best solution, luggage being brought to the airport by husband in a separate taxi. Nothing new, the flight was delayed. Heathrow just cannot sort itself out. With all that new technology, new owners, new terminal, nothing changes. 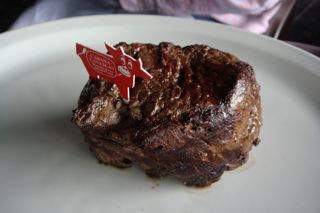 First meal in Buenos Aires had to be the steak at

washed down with a bottle of Alta Vista’s 2005 Terroir Special Malbec. All was forgiven after this absolutely delicious bottle. Argentinian steak is just amazing. I cannot describe the experience. Take that blasted BA flight, the only non-stop to Buenos Aires from London and make the trek to Cabaña.

The Hilton Macacha  is only a 5 minute walk away stituated in the new hip Puerto Madero suburb with it’s own naval police guarding the area. Very safe with all the modern amenities including a great vino shop right opposite the hotel. A sight seeing “hop on hop off” turista bus stops right outside the hotel making it even more convenient to experience Buenos Aires.

La Vinaria de Gualterio Bolivar is a must for the foodie. Recommended to me by a fellow FB-er, whom I met on a “women and wine site”. What Z was doing on a womens site still baffles me. Without him (a gem) and his wealth of all things Argentinian, I would never have found this place. Chef Alejandro Digilio trained under Ferran Adria at El Bulli. Using his knowledge of Argentinian ingredients to create innovative morsels was quite electrifying. 16 tastings served with Colombian Eduardo explaining each course washed down with my choice of Famiglia Schroeder’s worked well. Big heavy bottle with its metal label, first introduced to me by Marcel Moreno years ago.

In Search of the culinary Holy Grail

Cod (Stockfish) is dried in the cold arctic air till leathery and hard. When ready for use, the fish is reconstituted in culinary Lye – a solution of potassium hydroxide or potash. This process plumps the fish back to it’s normal size and probably removes all fat in the process. The fish is then filleted and washed. It is sold vacuum packed at this stage. To cook, the fish is cut into portions and placed skin side down in a baking dish. Some salt is sprinkled over, then the dish is covered with foil and baked for about 40 minutes at 200ºc. Because the fish has been soaked in water, the cooking will release this and in a way, gently steam the fish under cover.
Certainly not the mythical gelatinous gloop everybody talks about. It is not transparent. It is not soupy. It is not horrible. The lightly steamed fillet is served with crispy bacon, two mustards, grainy and powdered with some grated brunøst (Norwegian brown sweet cheese) and lefse (pancakes). All washed down with Norwegian beer and traditionally a Line aquavit  chaser. Eaten only around Christmas, Norwegians either crave or dismiss it. Folklore maintains it’s lucky, unlucky or otherwise… depending when and how you ate it. 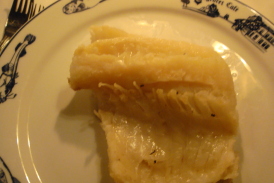 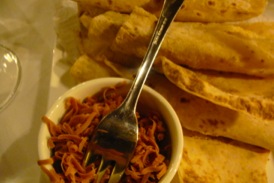 It all began that fateful day some fifteen years ago when R, on one of his Oslo trips, tasted this “unsumptious” morsel.

London, 3rd Dec 2009 marked my quest. Over a massive okonomiyaki feast with my friendly foodie vikings, the L word was mentioned. Rubbing the salt in, they then invited me to join them at their 2009 Lutefisk feast in Oslo 3 days after. Having politely declined due to time constraints, I was then sent a photo of the dish by the temptress herself during the meal. That did it – the challenge was set: Oslo, 6th Jan 2010.

The chef was told to hold one portion of Lutefisk. Flights and hotel booked, the event was set in stone.

Simple… the journey began. January 5th 2010, an auspicious day to say the least. The sun shining, bags packed and a fairly big birthday for R. Certainly required a pair of healthy lungs to blow out those candles (I managed – just, to light them all up before the wax melted away).

I even managed to serve up the traditional birthday noodles for breakfast. We left the house. School trunk, tuckbox plus 7 other items were put in the boot. The baglady herself comfortably settled with iPod glued in ears, we set off to drop Nat to school. As the minutes ticked away, so did the sun. By Burford, the clouds honed in. Within minutes, white specks, then fluff and then clumps of cottonwool. Andoversford was panneforte like and it just got whiter and whiter. Cheltenham College was postcard material. As the heavy snow came down, we continued to unpack and then bravely walked to MontP for lunch. Brave??? Birthday lunch and to apease Nat, sore, that we had managed to reach Cheltenham. 30 of the 60 SA girls did not make it back.

We had to be pushed out of SA and it took 4 hours to get to Oxford. Trucks and cars were abandoned along the single tracked A40. From snowless Oxford to Gatwick, R stepped on the gas and we were parked, checked in and at the gate with 10 minutes to departure. Arrived and in bed by 1.30am. Box ticked.

Spent the next day shopping and preparing myself for the “Indiana Jones”. Saw the most amazing baby Alpaca gillett at 499…. (at that point husband said why didn’t you buy it..). 9 NOK. Clearly he was glad I didn’t succumb. The meal was fabulous and company sincerely made the event. Norwegian hospitality is second to none. Crawled into bed at 1am.

The return home to London was even more fraught. Our flight was cancelled and darling R paid the £600 for single tickets rebooked on SAS, landing at Heathrow. A taxi was waiting to take us back to Gatwick to collect the car.

Overall, a truly exciting adventure and a quest completed…. NEXT>>>>

My sincere thanks to Marit at Oslo International Airport’s Salmon House, who so patiently allowed me to photograph and “interrogate” her. I did spend a few NOKs in her shop buying dried cod slices and you know what, I may yet make some lutefisk! 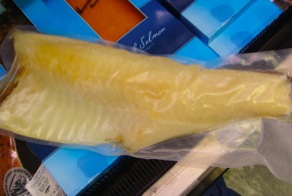 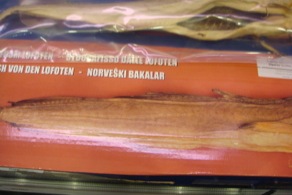